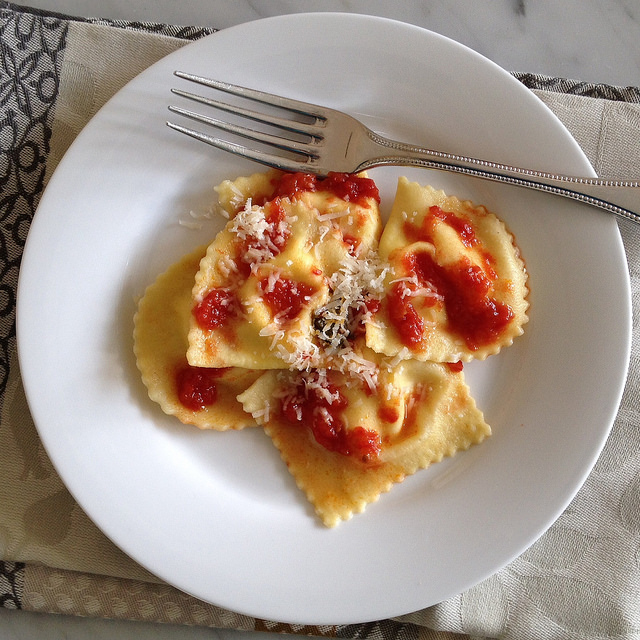 Today the Eating Italy interview series goes to Abruzzo with Italian and Abruzzese cookbook author Domenica Marchetti. I met Domenica via her blog, Domenica Cooks. I love her many Italian recipes and the way she writes about food and her love for Abruzzo. She’s written many Italian cookbooks and is a culinary instructor (To catch up with her in the U.S., check out her appearance schedule here). Her roots are in Abruzzo, where she now hosts culinary vacations. Today we’re lucky to have her here on Food Lover’s Odyssey to share her tips on the food in Abruzzo… 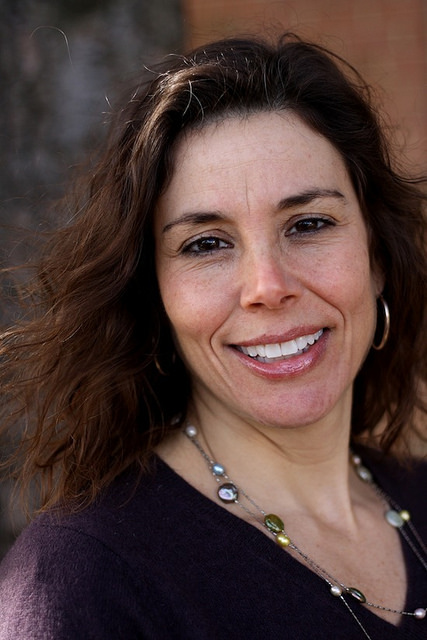 1) How did you get started with your culinary career and why is Abruzzo such a big part of it?

My background is in journalism rather than in the culinary world. I started out a newspaper reporter. When my kids were little I left my full-time job and began a career as a freelance writer. I decided to focus on food ~ specifically Italian home cooking ~ because that’s the subject I was most interested in. My mother was born and raised in Abruzzo (in the city of Chieti) and many of the dishes she made when I was growing up were from, or inspired by, her native region. Abruzzo remains one of the lesser-known regions of Italy, and so I feel that it is important for me to shine a light on the place, its people, its culture and (of course) its food. I always include recipes from Abruzzo in my books, and recently I started organizing culinary tours to this incredible region.

2) In general why do you love the Abruzzo region so much and what about it makes it so special to you and to those who might visit it?

For one thing, I have a sentimental attachment to the place. I spent my summers on Abruzzo’s Adriatic coast, where my family had a home for many years. I have wonderful memories of lazy summers spent at the beach with good friends. But beyond that, Abruzzo truly is a spectacular region. There are three national parks within its borders, making it Europe’s greenest region. There’s a saying: “L’Abruzzo ha tutto,” (Abruzzo has everything) and it’s true. The region extends from the Apennine mountains out to the Adriatic coast. So you have isolated, rugged mountainous parts, punctuated by occasional castles, fortresses and villages, and also hermitages ~ dozens of them ~ hidden within the rocks. In the winter there is skiing, in the summer, hiking. As you head east out of the mountains you have the gentler hills, cultivated with olive groves and vineyards; and finally, the beautiful coast, with long sandy beaches. Incredibly, with the exception of the beach towns in summer, there is very little tourist traffic in Abruzzo, which, of course, is one of the features that make it so appealing. It’s almost as though you have this magical place to yourself. 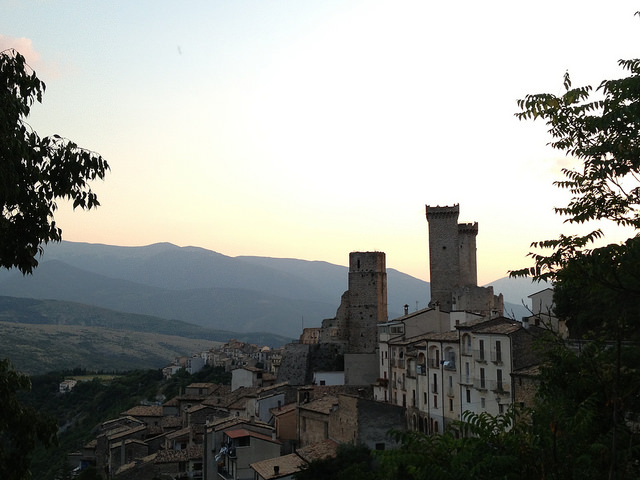 3) What is distinctive and special about Abruzzese cooking, especially in relation to other regions in Italy?

I am always struck by the diversity of cuisine in Abruzzo. But of course it makes perfect sense when you think about it, because the cuisine is a reflection of the place itself ~ you have everything from hearty mountain fare such as arrosticini and porchetta to rich fish stews and pasta with seafood. If you look at where Abruzzo is, and which regions border it, you see that it straddles north and south. It is bordered by Le Marche to the north, Lazio to the west, Molise to the south and the Adriatic Sea on the east. Molise (which used to be part of ‘gli Abruzzi until the 1960s) borders Puglia. And you can also see that both Umbria and Campania are within close driving distance. So there are influences from all these regions in the food of Abruzzo. Some of the best cooking in Italy (in my opinion) is happening in the Abruzzo countryside, in the agrituismi, where almost everything is grown or sourced locally. The food is quite rustic and genuine; there is nothing contrived about it ~ fresh mozzarella and scamorza; sheep’s milk cheeses, including fantastic sheep’s milk ricotta; lots of dishes with legumes, including lentils and chick peas; polenta, rich lasagne and meat ragus; plus a wealth of seafood dishes. Abruzzo is also where some of Italy’s best commercial dried pasta is made ~ De Cecco, Cocco, Rustichella d’Abruzzo, Del Verde. And let’s not forget the vegetables ~ artichokes, beans, chicories, eggplant, peppers, potatoes, tomatoes, squashes and zucchini. All of these vegetables grow in Abruzzo’s climate and are featured in the cuisine.

4) What tips do you have for visitors so that they can fully enjoy and experience the food of this region?

My biggest tip for people visiting Abruzzo is to get off the beaten path. My favorite way to travel in Abruzzo (or anywhere in Italy) is to rent a place—whether a house or an apartment—which serves as a home base, and then to take day trips by car. Driving gives you the freedom to explore, to turn off the autostrada and head for the national parks, the mountains or the hills. Abruzzo can seem tough to negotiate because of the mountains. Places that look like they are close by on a map or an easy drive may actually be quite remote because of the mountain roads. But try not to let that put you off. Those mountains hold countless magical experiences ~ fortresses, medieval villages, hermitages, and many, many country restaurants where great food is being made every day. In fact, some of the best cooking in the region (and in Italy) is taking place in Abruzzo’s country inns and restaurants. Talk to locals. The Abruzzesi are fiercely proud of their region and all it has to offer and are happy to share their insights with you.

5) What 5 regional dishes, desserts and/or wines would you say every visitor  to Abruzzo should not miss?

1. You must have a porchetta panino from a porchetta truck. The best porchetta comes from the Colledara area. Wherever you go in Abruzzo you will see these large trucks set up in piazzas and at farmers’ markets, with whole roasted pigs being carved up for sandwiches. Some families have been in the business for generations. Make sure you ask for cracklings on your panino!

2. Arrosticini. These slim skewers of cubed lamb (mutton, really) are cooked on special grills and served wrapped in paper or in special terracotta vessels. They are addictive. The best way to enjoy arrosticini is to drive up the Gran Sasso d’Italia to one of the picnic spots. There, you can buy your arrosticini already skewered and ready to grill. The proprietor will fire up your grill and get you started. You can buy wine or beer and enjoy your arrosticini ‘al fresco.’

4. Maccheroni alla chitarra ~ this might be Abruzzo’s most famous dish. The noodles are cut on a special wooden instrument, called a chitarra (guitar), that is strung with thin wires. The square-cut noodles are dressed with a meat-flavored ragù and tiny veal meatballs, and garnished with pecorino cheese. Comfort food at its best.

6. Abruzzo is probably best known for its red wine, Montepulciano d’Abruzzo. But two other wines I enjoy are Pecorino, a white wine made from an ancient grape that vintners have revived in recent years; and Cerasuolo, a dry and fruity cherry-colored wine (darker in color than typical rose’) made from Montepulciano grapes.

6) What are your 5 favorite eateries in Abruzzo right now?

This is a tough question because I know that there are probably many eateries still waiting to be discovered! But here are a few favorites.

1. Plistia: My family and I have been going to Plistia since the mid-1990s. It’s located in Pescasseroli, in the National Park of Abruzzo. It’s one of those restaurants with no menu. You eat whatever is being cooked that day. Laura del Principe, the chef, is a wonderful cook and has a seemingly endless array of handmade pastas in her repertoire.

2. Ristorante Domus: This remote restaurant is located high in the hills above Bisenti, in the Teramo province. It has spectacular views of the Gran Sasso mountains. The chef, Rosa Narcisi, turns out ‘cucina tipica’ that is as genuine as any you’ll get. She specializes in maccheroni alla mugnaia, a thick hand-stretched noodle that is dressed with Abruzzese ragù. [I wrote about it for The Washington Post and included a recipe in The Glorious Pasta of Italy.)

3. Ristorante Convivio Girasole: Located in the picturesque town of Loreto Aprutino, this restaurant is known for its creativity with local ingredients, paired beautifully with the proprietor’s own wines.

4. Ristorante Caldora, at Punta Vallevò: Fresh seafood (including sparkling crudo), beautifully prepared, with a location right on the water.

5. Biscotteria Artigianale: This small shop in Scanno specializes in a selection of rustic cookies with ingredients like nuts, chocolate and ‘mosto cotto’ (grape must syrup). The aroma is heavenly and you can smell the cookies even before you come upon the partly hidden shop.

7) What would your ideal “best ever” food lover’s day in Abruzzo look like?

Our day would start with a cappuccino and a cornetto at a local bar. Then we would set off for the Campo Imperatore, on the high plain of the Corno Grande (the highest peak of the Gran Sasso Mountain range), taking less-traveled back roads. Campo Imperatore has an other-worldly look about it. It was the filming location for a number of ‘Spaghetti Westerns,’ and is quite breathtaking. We might make a stop at the Campo Imperatore Hotel, where Mussolini was imprisoned by the Italians and ‘rescued’ by an airborne raid ordered by Hitler and transported to Germany. Then we’ll stop for arrosticini—delicious grilled mutton skewers—at La Baita della Sceriffa, which we’ll wash down with some good Montepulciano d’Abruzzo. Eventually, we’ll mosey our way back down to sea level, stopping, of course, for un caffè or gelato. Late in the afternoon we’ll stop at Fontefico winery, near Vasto, for a glass of organic Pecorino or Cerasuolo. For dinner we’ll board a trabocco, one of those spindly wooden piers that juts out over the sea, where we’ll be treated to a feast of seafood ~ tiny clams, stuffed mussels, tomato-braised octopus, and brodetto Vastese. We’ll cap off the evening with a little glass of Genziana, an appealingly bitter traditional Abruzzese digestivo made from gentian root. 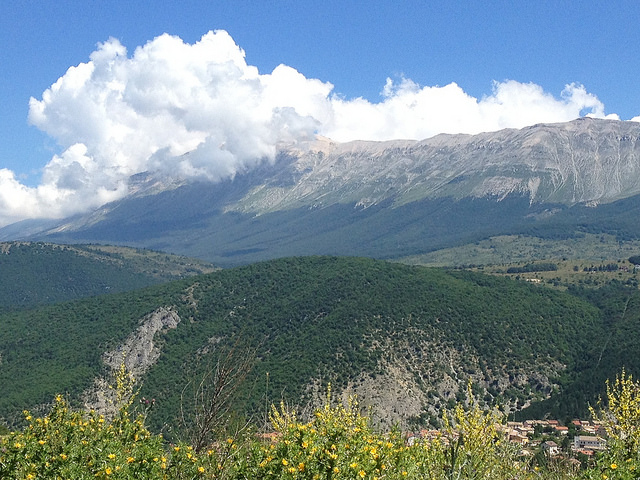 Thanks again Domenica for letting us know about the food of Abruzzo! Who’s ready for a culinary vacation with her to this region in Italy? I certainly am!

Eating Italy is a new interview series focussed on finding out how locals eat throughout Italy. Once every few weeks we’ll take a virtual food-lover’s trip to a specific spot around the boot. I’ll ask my food-loving friends to share their insights and tips on where, what & how to eat in their home city or region.

**All photos in this post are owned by Domenica Marchetti, of Domenica Cooks, and used with her permission.