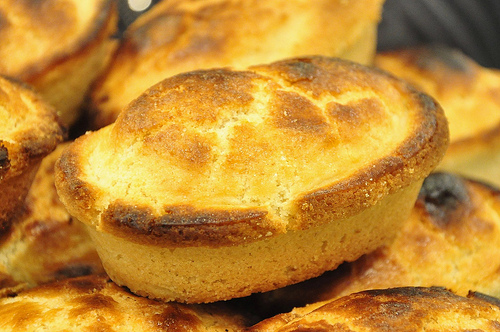 In Salento, dessert is all about the pasticciotto! The pastry from Lecce & the Salento region is as much a symbol to this part of Italy as the croissant is to France. Whether it be pastry shop, bar, or restaurant menu, you can be sure to find pasticciotto. It was the first gift I received upon arriving in Lecce. I was also able to see them being made at several of the Salento pastry shops I visited. The pastry consists of a short crust pastry filled with pastry cream. The classic pasticciotto uses your basic egg-yolky pastry cream, but once in a while the chefs get creative. Chef Luca Capilungo has two variations, the basic and one with chocolate pastry cream as the filling. And when I visited Bar Castello, they made pasticciotto with purple Olivotto flavored pastry cream. I’ve also had an all-chocolate, inside and out, pasticciotto. 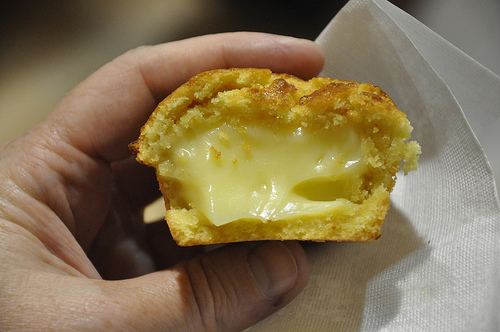 Inside the classic Pasticciotto Leccese

The pastry was first created in Galatina in 1745 at Pasticceria Ascalone. Galatina is a small town south of Lecce, and Ascalone is still open and still making pasticciotto. In fact many say the current chef makes the best pasticciotto in Salento. Massimo, who grew up in Galatina, gave us a tour of the town and told me the legend of pasticciotto’s creation. In 1745 Galatina was most widely known for the trance-like dance called the pizzica. At the time, the dance was looked down upon by those outside Galatina and its citizens weren’t well regarded outside the city walls. Galatina wanted to find something to improve its reputation and make its citizens well-liked. What better to make people like you than pastry, right? Signor Ascalone created the pasticciotto to solve the problem.

At the pastry shop, Il Golosone Prato, a few minutes from Lecce in Novoli, I saw production of pasticciotto on a grand scale. The chefs even let me participate; I piped pastry cream into the molds. 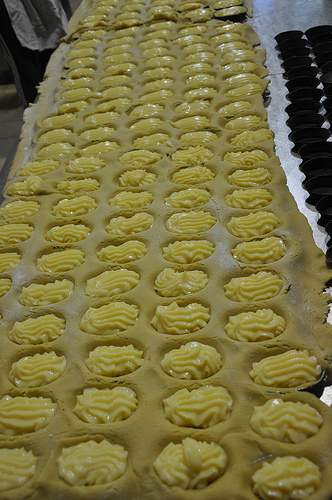 A whole lot of pasticciotti just filled with pastry cream 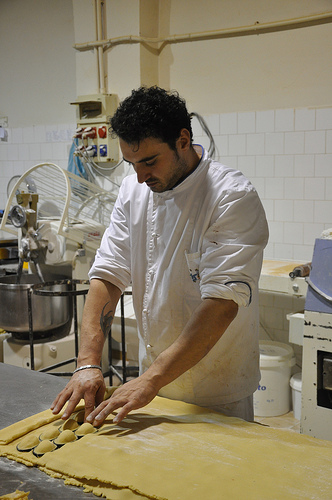 Alessandro of Il Golosone forming the tops of the pasticciotti 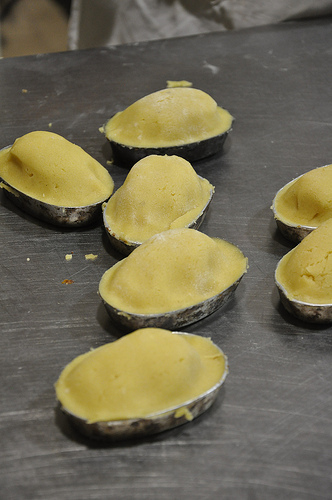 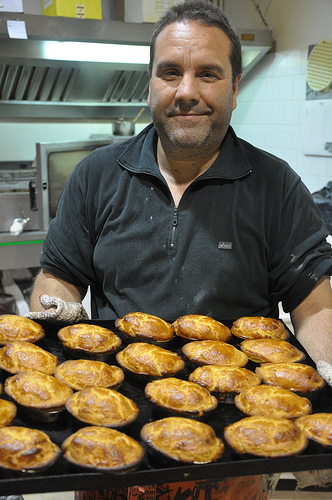 Salvatore of Il Golosone with pasticciotti right out of the oven

The crust is traditionally made with lard, or strutto in Italian. I kind of anticipated the freak out that would happen if I posted a recipe that calls for lard, so I asked a few of the pastry chefs about substituting butter. Using butter changes the texture of the crust to one that is harder and crunchier, making the pastry harder to eat because the center is a cream. Using lard creates a moister and softer crust, so you don’t have pastry cream splattering out everywhere when you bite into the pasticciotto.  However, in the recipe that follows, I’ve given you the option to use either lard or butter.

For the Pasta Frolla (the pasta frolla recipe is adapted from Chef Luca Capilungo’s recipe):

For the Pastry Cream:

20 oval molds for pasticciotto, each buttered and floured

To make the pasta frolla (short crust pastry dough):  In a stand mixer with a paddle attachment, mix together on low speed the flour, baking powder, lard (or butter) and sugar until the mixture is the consistency of peas.  Add the egg yolks and stir together just until the mixture is combined.  Divide in half and create two round disks of pasta frolla. Wrap each disk with plastic wrap. Refrigerate for 2 hours before rolling out.

To make the pastry cream:  Place the milk and the lemon rind in a nonreactive heavy bottom sauce pot and leave for 20 minutes. Then bring the milk to a scald.  Let the lemon rind steep in the milk for 10 minutes.  In the meantime, in another bowl, whisk together the sugar and egg yolks until the mixture becomes pale.  (The whisk must be nonreactive also.) Add the cornstarch and flour and whisk to combine.

Strain the lemon rind out of the milk, and slowly pour the warmed milk into the egg yolk mixture.  Whisking together as you pour.  Once all the milk and egg yolk mixtures are combined, place back into the saucepot and over medium-high heat.  Bring to a boil, whisking vigorously the entire time.  Once the mixture has become dense and just started to boil, remove from the heat and strain through a fine-mesh seive into bowl over an ice bath and let cool for 10 minutes.  Spread the pastry cream into a 9×13-inch glass dish and cover with plastic wrap.  The plastic wrap should be touching the pastry cream to keep the cream from developing a film.  Refrigerate until cold. 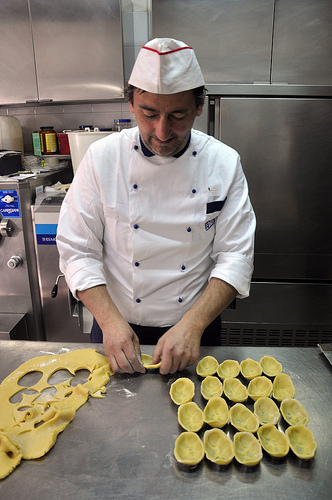 Vladimiro of Bar Castello forming the dough into the molds

To assemble the pasticciotto: On a lightly floured surface, roll out one of the disks of pasta frolla into a square until the dough is about 3/8-inch thick.  Line your pasticciotto baking molds so that when you place the sheet of pastry dough over them, it will cover all molds. Run the rolling pin over the dough to “cut” the dough into the necessary oval form. With your fingertips, press the dough into the mold, so that the dough sits against the bottom of the mold and completely up the sides.

Using a pastry bag fit with a large star tip, at least 3/4-inch in diameter, pipe the pastry cream into the molds. The pastry cream should reach the top of the mold. Roll out the second disk of pasta frolla in the same way you rolled out the first, but to 1/4-inch in thickness. Lay the pastry dough over the tops of the filled molds. This time using your fingers instead of the rolling pin, press around the top edge of each mold to make a cut in the dough. Along the edges of the mold, press down with your fingers to seal the pastry and to create a little “mound” in the center of each pasticciotto.  Brush the tops of each with egg wash and bake at 375 F for 15 minutes. The tops should be golden brown. Cool and serve. Enjoy! 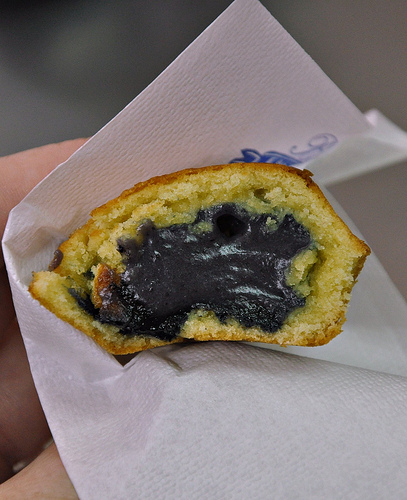 Make pasticciotto and many other classic Pugliese dishes on a delicious 9-day food lover’s culinary vacation in Puglia! For all the details, see the page: Food Lover’s Culinary Tour in Puglia

Olivotto: The Sweet Side of Olives

Seafood and More with Chef Lino at Ristorante Donna Lisa

Orecchiette and Salentine Breads – Cooking with Mamma Giulia in Salento

Under the Salento Sun – The Masserie of Salento

Cheese in Puglia – Making and Eating Fresh Cheese in Salento

Lecce: The Baroque Beauty of Puglia

The Art of Making Pasta by Hand: A Pugliese Pasta Lesson with Nonna Vata

Tour of Masseria L’Astore and its Frantoio Ipogeo in Salento