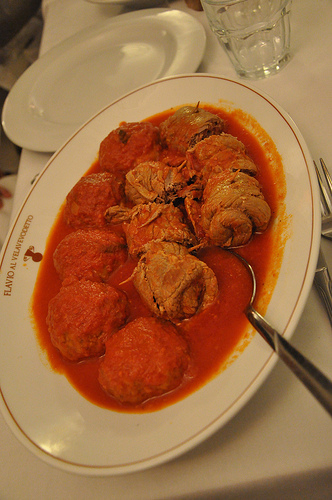 What could be better than having classic Roman cuisine in Rome? Well, add to that being at Osteria Flavio al Velavevodetto, currently one of the most-loved places by Romans, and then dining with four food-savvy Romans. Just when I thought the night was perfect it got even better! We ended on a most splendidly sweet note, with an out-of-this-world tiramisu.

On this food lover’s night in Rome, I met up with the couple behind Tavole Romane. They have both a food blog about dining in Rome, and give delicious food tours in and around Rome. Their blog posts about good eats in Rome have been a part of our Eating Italy series, and they wrote this sweet guest post for FLO about Best pastry shops in Rome for Christmas sweets. They invited me to join them for a private version of their Roman Cuisine Sit Down Meal tour. Also at dinner with us was Giovanna and Joanne, the ladies who lead these tours. Giovanna publishes the Italian food blog Burro e Alici and has Roman ancestry as far back as she can search. Joanne is an Italian-American by birth and Roman by adoption. She is a sommelier who has lived in Rome for around 30 years and knows her Roman cuisine and where the best of it is in the Eternal City.

Their knowledge of Roman cuisine was exceptional, but even more impressive was how passionately all four talked about each dish, the process of making it correctly (there are many rules, you know), and the dish’s place in the history of Rome and its cuisine.

It soom became clear that I was definitely with a group of Roman food purists as heated discussions, although very good-natured, arose over recipes and techniques. For instance, all agreed that onions in no way belong in Pasta alla amatriciana, which, by the way they reminded, is not really Roman; it comes from Amatrice. And oil in cacio e pepe is cheating. Butter in cacio e pepe is completely out of the question! “WHO would put butter in cacio e pepe!?” They asked. “Uhm, well, I saw them do it on Anthony Bourdain’s visit to Roma Sparita,” was my whispered response while making a mental note to adjust my Cacio e Pepe recipe. Food was at the center of every conversation, even when every now and then the conversation veered off into Roman emperors and to the Italian language and what the best Italian word was to say, “melted chocolate.” 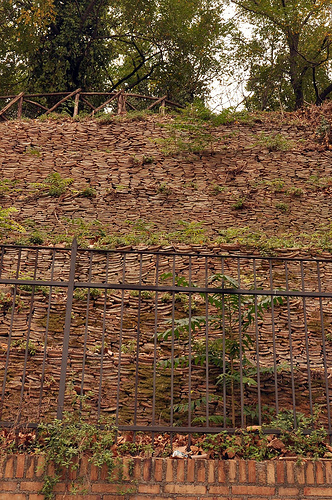 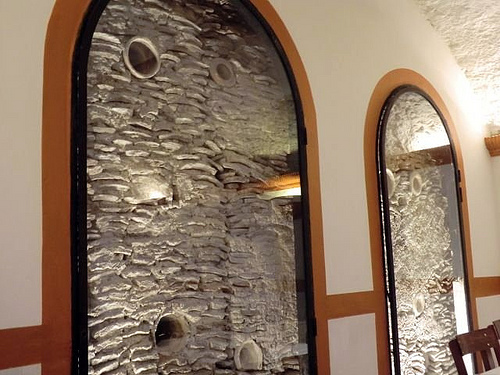 The osteria is even on a historical sight. Flavio al Velavevodetto is set into Monte Testaccio. The approximately 115 foot “mountain” is more like a hill, or even a heap, created by discarded olive oil amphorae dating back to at least 200 AD and possibly even the 1st century BC.

This was so much more than a guided tasting. In addition to the great meal, from this dining experience I took away a little Roman history, more knowledge of the Italian language, and insight into Roman culture as it was and is. And just as special, I got to break bread with a great group of passionate, food-savvy people and through these conversations that started and ended with the food we got to know each other better.

Antipasti ~ Fried Seasonal Vegetables or “The garden on a plate” (L’orto nel piatto): 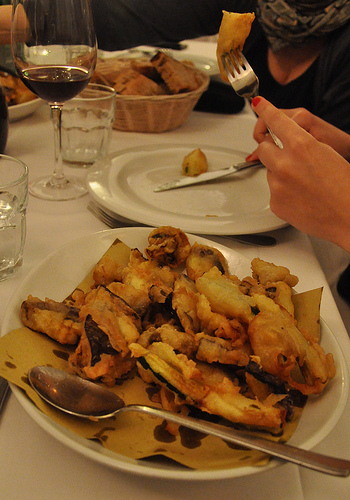 Fried in pastella (batter), we had perfectly fried and seasoned mushroom, eggplant and zucchini to whet our appetites for the huge meal ahead.

The pasta dishes (i primi piatti): 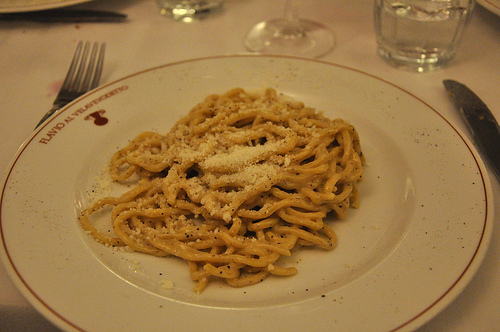 The pasta course consisted of two of Rome’s classic dishes. Our first plate of pasta, (and it was about the same size as the size of the pasta plate above) was rigatoni alla carbonara. But, as I said earlier, there are rules. When the carbonara sauce is at its perfect consistency – a creamy yellowy emulsion of cheese and egg yolk, there is no time to waste taking pictures. You must eat it while it’s hot and quickly! The second plate of pasta was tonnarelli pasta, made in-house (long spaghetti-like pasta but much fatter in diameter) with cacio e pepe (cheese and ground pepper).

Both these dishes seem easy to make, but timing and coordination are everything. Add the cheese and/or the egg yolks at the wrong time and don’t mix it quickly enough and instead of a silky sauce you have a lumpy mess. A mistake in timing, temperature and coordination with the carbonara and you get scrambled eggs. At Flavio al Velavevodetto, they executed each dish perfectly.

The meat course (i secondi piatti) ~ “Il Macellaio in Tavola” (The butcher on the table): 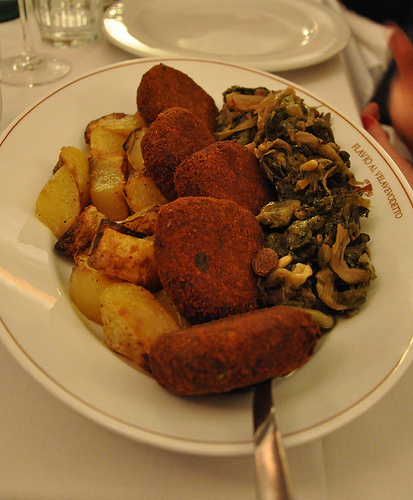 Herbs, bread or breadcrumbs, eggs etc. are added to meat that was previously used to make stock and/or broth. These square version of meatballs were then breaded and fried and served with seasonal vegetables, roasted potatoes and escarole sauteed with pinenuts and raisins. This was my favorite dish of the night. Whenver I hear boiled (bollito), I immediately imagine something bland with all the flavor absorbed away by the water. Flavio put all the flavor and then some back into these polpette.

A mix of meat cooked in a sauce. This sauce was the flavor of the sweet and intense tomatoes, the likes of which that are so hard to find outside of Italy. We had polpette (meatballs) and involtini (rolled & stuffed meat) stuffed with mortadella. They also brought la coda (oxtail) cooked in the same sauce. 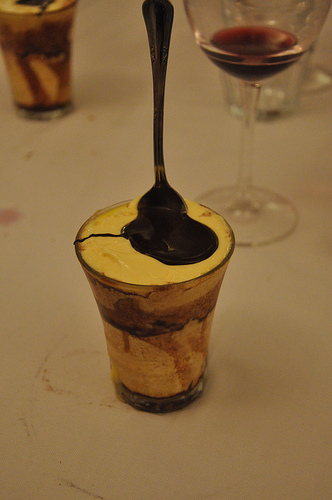 Probably the best tiramisu I’ll ever have. It’s a variation on the classic dessert and in a cup. Flavio makes a crunchy cookie in house that stays crunchy even while floating in all that cream. There are pieces of choclate in the mascarpone cream. And on top is the squaglio di cioccolato (melted chocolate). In between spoonfuls of an oh-so-decadent mascarpone cream, you get chocolate pieces and melted chocolate along with the crunch of the cookie for a really nice textural contrast. Joanne tried to hide hers under a napkin “tent” so she would stop eating it. I don’t think it worked, though I was too busy devouring my cupful. Yes, we were all very full from the meal, but just couldn’t stop taking spoonful after spoonful of the tiramisu. Yes, I asked for the recipe, but I’m pretty sure Flavio’s not sharing it. Be sure that the first kitchen I’m in during my travels, I’ll be trying to replicate this dessert. 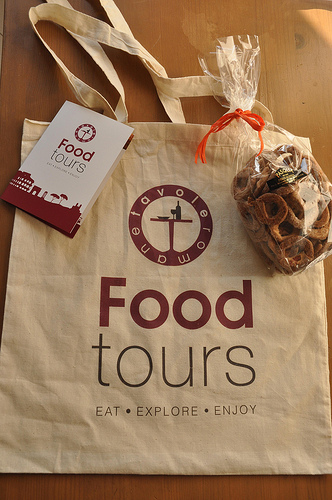 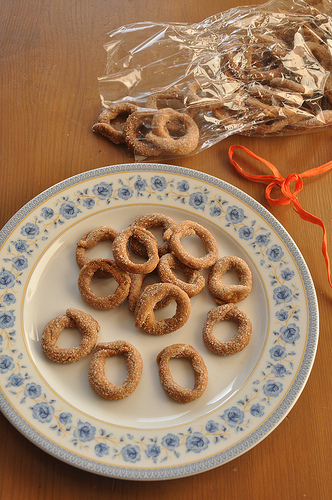 Along with the dinner, Tavole Romane gave me their tradition tour gift bag with another sweet that was almost as addictive as the tiramisu. In the bag were Roman cookies, ciambelline al vino, little crunchy cookies with a little wine added and shaped like a ring. In addition to the sit down food tour they offer at Flavio al Velavevodetto, Tavole Romane also offers another sit down food tour at Asino d’Oro focussing on the creative cuisine of the city and offer walking food tours in many districts throughout Rome. If you’re going to be in or around Rome on June 23, 2012, Tavole Romane is offering a special food tour where they combine Rafael paintings with a tasting lunch at the Michelin-starred Glass Hostaria for a really great price of 65 euros. 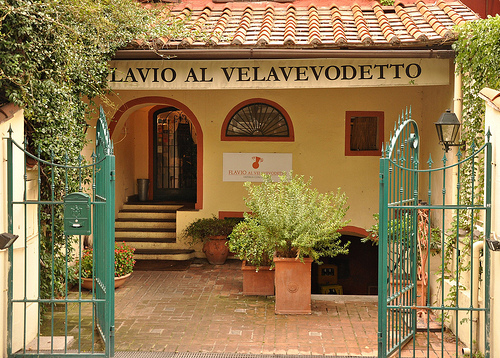