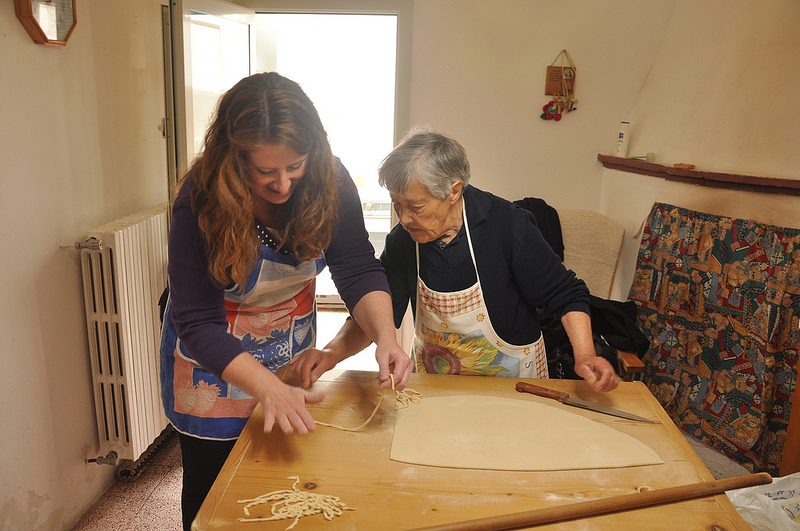 When I was a little girl, I remember sitting on a stool in the corner of my nonna’s kitchen watching her teach my mom how to roll out pasta by hand.  In minutes, my grandmother could roll dough around a rolling pin and spin out a thin sheet of pasta; one that almost covered her 8-person table.  She never taught me.  Her theory was to teach my mom first, and then my mom would teach me.  My mom never really learned before my nonna passed away. My mom was more attached to cranking out her pasta on the machine rather than with the rolling pin.  One of my dreams has always been to have an Italian nonna teach me to roll out pasta dough by hand.

This trip to Puglia, I got the chance!  Debora brought me to her Nonna Vata’s house to make pasta.  Nonna Vata is a petite lady, who barely reached my shoulders.  Don’t be fooled by her small stature.  Her feistiness and energy surpassed all four of ours.

When it came to making pasta, though, she was all business.  I had my camera out ready to take photos.  She asked, “Are you going to make pasta or take photos?”  Head bowed in shame, I handed my camera to a friend, who took photos for me.  “Before you do anything, wash your hands.”  “Si, nonna,” I replied recalling all the “Oui, chefs” I’ve uttered in the same submissive manner.

There was no written recipe, and she measured nothing.  She said she used “around 800 grams” of durham wheat flour, the traditional flour used for pasta in Puglia.  She added as much water as the flour needed, using what I’ve realized is the the most popular measurement Italy, “quanto basta” or “q.b.” meaning stop when you have enough.  She knew when to stop adding water and when to stop kneading solely by the feel of the dough.  She’s been making pasta for over 70 years. Of course, her hands and eyes are far better than scales and temperature gauges. How to make pasta dough according to Nonna Vata:

Sift the durham wheat flour through a tamis.  Make a well in the center of the flour.  Before you add the warm water, make the sign of the cross over the flour.  As Nonna explained, while shooting her hand skyward,”Without the hand of God, you can’t do anything!”

Add warm water, “not cold and not hot,” little by little to the flour.  She worked it in with her hands until the dough was the right consistency.  She let me help so I could also feel the dough as we added the water.  Once the mixture was combined together, she started kneading.

She kneaded the dough for less than five minutes until it was the right consistency. The dough was soft, not damp, and you could easily make an impression in it with your fingers.  Notice in the photo how she pressed her thumbs into the dough as she kneaded it, rolling it away from her on the board.  She formed a ball, made another sign of the cross on the dough, and wrapped it in a towel to rest for 30 minutes.  She covered the dough in a big blanket, calling this its penance. When the dough was ready, she took it out, made another sign of the cross on top of the pasta dough, and she began rolling it out into a perfect circle.  Now, I know that you must turn the dough 1/8 turn after each roll to keep a perfect circle, but her hands moved so quickly, I never saw her do it.  Once the dough was thin enough, she rolled it around the rolling pin and continued rolling to get the thin sheet of pasta. (This is the part that can get a little tricky, keeping the dough from sticking together and rolling out evenly.) With this sheet we made two pasta shapes:

Sagne Ncannulate: It is a Pugliese pasta, and it along with orecchiette and minchiareddhri are the main pasta shapes you’ll find in stores in the region.  The name is in Pugliese dialect, and as Claudia told me, there is no Italian translation.  They are long strands of twirled pasta.  They resemble curled ribbons on a wrapped Christmas or birthday present, depending who makes them, they can be very thin or wide, varying from 1/4-inch to even 3/4 or 1-inch in thickness. We made them by cutting pasta into thin strips, about 1/4-inch in width.  Then, holding one end of the strand in the air, and rolling the other end of the strand with your hand, you curl the pasta into a twirl, or as they say in Puglia, Sagne Ncannulate. To roll the pasta, you place the bottom part of your palm on a pinched end of the dough, and bringing your hand towards you on the board, rolled the pasta between the board and your hand. Nonna Vata whipped out a few of these tightly twirled pasta strands and then let me try.  After screwing up several, I finally made one!  Woohoo!  I made a few more, and did get better with each try, but believe me, they’re not easy to make.  None of mine were as tightly twisted as Nonna Vata’s were.  She emphasized it takes practice.  She also said that you can make bigger sagne ncannulate, cutting pasta strips about 3/4-inch in width. The bigger size is what I saw at all the pasta shops and food markets in Lecce and Salento. We also made massa (also called lasagne in the region), which I saw the previous day during our visit to The Tables of San Giussepe.  This pasta shape was much easier to make.  Nonna cut half the sheet of pasta, rolled the sheet up into a log, and cut thin (about 1/8-inch) slices.  Then she opened up the small strands of massa by fluttering her hands through it. No recipe, cookbook, nor even a video, can ever teach you what an 85 year-old woman, who’s been making pasta her whole life, can teach you in one day.  She helped me get a feel for the dough, noticed and corrected me when I did something wrong, and placed her hands over mine to help me understand how to move my hands to roll out and shape the pasta.

JOIN ME IN PUGLIA!
We’ll be making pasta by hand with one of our beloved Italian Nonnas!

See our the PUGLIA CULINARY VACATION page for more information!

I realize nowadays many use pasta machines, but I believe this is an important art in the tradition of pasta making and in Italian food.  If for no other reason than to appreciate the amount of work nonne, like Nonna Vata, did before machines, you should see how it’s done.

If you haven’t yet had a lesson from an Italian nonna, seek one out on a trip to Italy and take the opportunity to learn.  All our our culinary vacations to Italy include at least one pasta making class with a local Italian Nonna or Mamma. These classes are always named one of the highlights of the vacations. In the meantime, besides the “tricks” I noted above, here are a few more I learned from Nonna Vata:

1. Know when to stop adding water to the pasta (this varies due to humidity and room temperature) so the pasta is the right consistency.

2. You need a rolling pin that’s thin in diameter (about 1 to 1 1/2 inches). Nonna Vata gave me one as a gift, but she said you could also cut the end of a wooden broom stick.

3. You need an extra large wood board, larger than what the rolled out sheet of pasta will be.

4. Most importantly of all – you need to practice.

Since my lesson with Nonna Vata, I’ve been doing a little practicing with the rolling pin she gave me, making Sagne Ncannulate with a special tomato sauce recipe from Puglia.